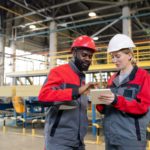 Manufacturing is in a difficult situation. In the United States, this sector is one of the most critical, with a multiplier of 1.40x for every dollar spent, according to the National Association of Manufacturers, but it has a severe issue with its public image. Despite the fact that it has seen a huge rise since the national economic collapse a few years ago, it still has one of the highest skills gaps of any industry. What do you think is the most difficult problem? Retaining Millennials in manufacturing

The Deficit in Manufacturing Expertise

The manufacturing industry has improved enormously since the recession of the past decade. An increasing number of manufacturing-related products and services have necessitated a surge in the number of workers needed in the United States. The problem is that that demand is not being satisfied.

Over the next decade, an estimated 3.5 million manufacturing positions will need to be filled, but according to research, a whopping 1.9 million of them will go unfilled as the difficulty of finding skilled workers continues to rise. What’s the reason for the void? The retirement of the Baby Boomers is one of the few significant causes. According to some estimates, there are 10,000 Baby Boomers set to leave the workforce every day, causing a serious skills shortage for many businesses.

Even more challenging is that Millennials aren’t driven to take up the roles that Baby Boomers are retiring from. Millennials, according to a new Deloitte poll, consider manufacturing to be …

Posted in Jobs | No Comments »